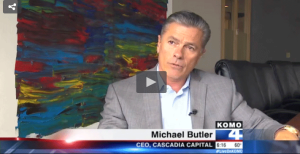 One of the key ingredients that separate craft brewers from one another is how they blend the wide variety of specialty hops in their recipes for beer.

According to the USDA, Washington State accounted for 79 percent of hop production in the United States. The declaration will mean water restrictions on some farmers who grow hops, and hops use a lot of water – up to three gallons per day per plant.

“For the most part this year’s crop is okay, next year’s yet to be determined,” says Stromberg. “We definitely need to increase the snow pack.”

If the Northwest doesn’t get a cool summer and snow next winter, it “could really, really be catastrophic,” says Stromberg.

The award-winning brew master is in touch with hops growers several times a year, and planning another trip soon to discuss future hops pricing.

“There are water issues in the valley, not panic issues,” says Stromberg. “They are being very strategic about when they are letting water through.”

Restrictions are underway to allow for enough water to make it through the September harvest. Prices are have been going up for hops because of the demand for specialty hops by craft brewers.

Michael Butler, Chairman and CEO of Cascadia Capital, says the land is being bought for premium prices for speculative reasons and future crop production, including very profitable almonds. The purchases make it harder to expand hop production.

“So you have the demand for hops, you have the high price of acreage, and the potential shortage of water, as three drivers of an increase of hops prices which would drive an increase in beer prices,” says Butler.

There is no talk in the industry of expanding hop production to other states because demand is so high, and Washington’s issues with expansion and a drought.